Today, I’ll present you my most unusual transcription I’ve ever made: The Opening of Mirai Nikki transcribed in classical-style.

This transcription is in several points of view special, because

-it is reasonably difficult, technical skills is a must to play this

-is the longest transcription I’ve ever written, (8 pages long)

-I’ve made over 150 edits in the last few days, until I was 100% satisfied with the transcription, so this transcription took the longest time for me to finish

Warning, the following section, is an incredibly long musical analysis of my transcription, which will bore 99% of you readers, but there is a small chance that some people might actually find it interesting. Oh, and some basic musical knowledge wouldn’t be bad, either.

So, if you have already listened to my transcription, you would probably ask yourself, “what the…? Why are you adding so much original stuff at the beginning?”

Well, I actually wanted to experiment a little bit with my transcribing technique, so I decided to try something new and adding a “original segment” at the beginning of the transcription instead at the end.

I will explain now how the “original segment”, was developed in the past few days, which is over 26 bars long.

Lets have a look at the first theme the Opening introduces to us:

The beginning of the OP sounds like a choral to me (or in layman’s terms: it’s sung by a choir) and I really liked the grandiose sound. (I’m a fan of vocal works)

Pity it’s only four bars long, before the guitar riffs suddenly kicks in and interrupting this small introduction.

So I decided to expand the first theme by writing a baroque-esque prelude.

Of course I am not just adding stuff randomly, instead, I use a lot of musical material which are already provided in the first theme.

For example, the first part of my “original segment” begins right after the first theme:

It’s basically a variation of the first theme: notice the same harmoniy in the left hand.

The variation is a more speed up version of the first theme, with fast sixteenth-notes on the right hand. This is also a foreshadowing to the later themes (see 2.)

It contains the same notes, it even has a similar rhythm

Additionally, I introduced a new motif, a kind of “downward movement”, it was at first introduced in the first theme:

then it makes appearances in bar 6-7 in the right hand:

followed by the left hand in bar 8: 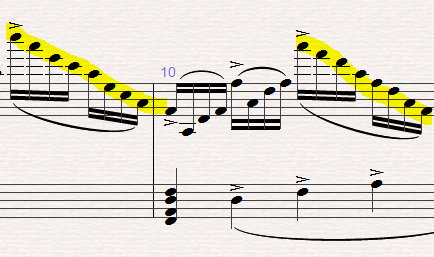 …and finally one in the latter part:

… and made a fugato with this small motif. In order to achieve a monumental feeling, I’ve added a lot of octaves and huge chords in the right hand, which almost covers the entire upper half of the keyboard.

Last but not least, I’ve added a Liszt parody in the transcription: Those freaking insane octaves in bar 24-28 are almost the same as the beginning of Liszt Piano concerto No.1. To give the “original segment” a proper end, (the equivalent to the sudden guitar riffs in the original opening), I decided to end it with a bang, and what could possibly fit better than a virtuosic Liszt piano concerto introduction? And coincidentally, the liszt piano concerto is in the same key, as the OP itself (it’s actually in E-flat major but it still fits)

The original piano score in Liszt piano concerto no.1

The slightly modified Parody in the transcription

Well, that’s all I have to say for now. Maybe there are more hidden motifs I’ve forgot to show you, but I think you readers are already tired of this, so I guess I’ll just stop now.

By the way, I’ve been using these “hidden motifs” from time to time in my older transcriptions too.

23 thoughts on “How to arrange in “classical style””