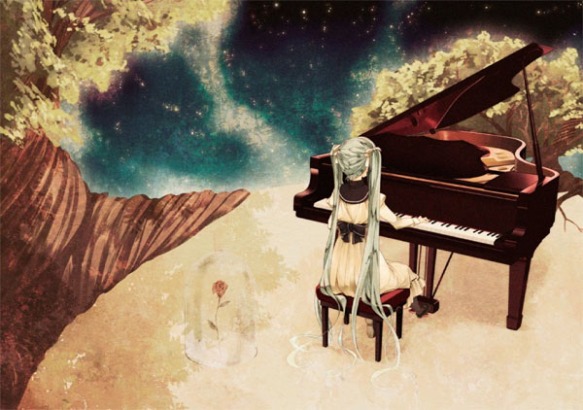 Allow me to introduce my first blog on the internet : animenz.wordpress.com!

So what’s the purpose of this blog?

Well, basically, I love music. Music is the essence of life. Music connects people all over the world. Without music, life would be a mistake. I am a fan of almost all music genre, but I especially like Sountracks and classic.

To sum it up: I play the piano for almost 13 years now and  thus, I have a lot of experience.

One day I somehow got interested in japanese Animation (also known as Anime) and so i got to know jpop and Anime soundtrack. And, some of them are really fabulous (like joe hisaishi’s OST’s). I don’t know why, but after a while, I became addictive of Anime and its music ( hence Anime is known as the Anti-drug, because when you’re addicted to Anime, you can’t afford drugs )

Eventually I tried to cover some Anime music on the piano and… it worked, and  it was very easy too (mostly because I have a absolute pitch). So I thought: why not try to write it down?

I googled for Anime piano sheets and I found josh’s anime sheet. This page really inspired me and I liked his transcriptions a lot. But after I played it, I felt quite dissatisfied: it was too easy (for me). Sure, it sounds adequate to the original but it’s not very challeging for me. So I decided to make my own transcriptions. I had the idea for nearly 2 years now but I never have got an idea HOW i should write it down.

But now the time has come: Yesterday, I finally got a copy of my ordered Sibelius 6.  And … I can’t believe it. Its… the epitome of the software technology and a must-have for every hobby/pro- composer. (Of course I know that there are other softwares such like Finale but I’m fully satisfied with Sibelius 6). I can’t believe how many functions and options it has. You can do almost everything. It’s like a dream. Hell yeah!

So I finally get an acceptable the world’s best composer software and I immediately started to use it.

And the results are fascinating!

So starting today, I’ll try to publish one transciption per week. Most of them will be Anime OP or ED but I’ll do some Soundtrack too, of course. I can only play the piano, but l can still make some  sheets for the violin or even for duetts.

I gladly accept requests (free of course) if you want the transcription of a piece of music. (preferably Anime music)

Okay, I guess that’s pretty much everything I wanted to say and with this: let’s start the Animenz project!

15 thoughts on “The start of “Animenz” project”